The decision of whether to use Category 5e, 6 or 6a cables to wire your Ethernet network pretty much comes down to cost, data transfer speed and connection distance. All use RJ45 connectors to patch into your network via server, router, computer or other hardware. As well, all support Power over Ethernet (PoE). Otherwise, each cable has a different standard. 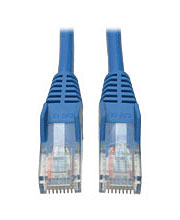 Cat5e (Category 5 enhanced) is the least expensive, but also the slowest. It supports data transfer speeds up to one Gigabit per second (Gbps) at 100 MHz up to 328 feet. Crosstalk among the wires within the cable is reduced, resulting in less interference and less chance of transmission error. Certainly, it will provide capable performance for most of today’s applications, but Cat5e also leaves less opportunity for upgrading in the future.

Cat6 is pricier and faster than Cat5e, but also limited by distance. Cat6 supports data transfer speeds up to 10 Gbps at 250 MHz with even less (or no) crosstalk interference, due to the cable’s improved insulation. However, its 10 Gbps speed is effective only up to 164 feet. Despite this limitation, Cat6 cabling is more qualified to handle the fast pace of Gigabit Ethernet networks. It’s likely Cat6 will eventually replace HDMI as the audio/video transmission standard in the future.

If you’re looking to set yourself up for a successful long-term Gigabit Ethernet network, Cat6a (Category 6 augmented) is the right choice. Yes, it’s more expensive than Cat5e or Cat6, but the hardware you’ll be connecting to your network will only become more sophisticated—not less—as technology grows. Cat6a supports the same 10 Gbps transmission speed as Cat6, but up to 328 feet and at 500 MHz. And, of course, with even less crosstalk than Cat6.

Data rates double every 18 months. While Cat5e will likely provide the necessary performance you’re looking for, you may decide that future-proofing your network with Cat6 or Cat6a cabling is a safer bet.