If connectors fit together, they must function together, right?

Not so fast…just because Thunderbolt™ 1 or 2 and Mini DisplayPort use the same connector, that doesn’t mean you can always plug one into the other and get results.

Mini DisplayPort is a passive technology with its sole function to deliver audio/video signals from a source to a display. DisplayPort 1.2 technology is known for outstanding performance capabilities with support for uncompressed full-color 4K video at 60 Hz, multi-channel audio and 3D stereo. But that’s the limit of its awesomeness.

Thunderbolt is a specialized type of Mini DisplayPort connectivity. Although the shape and size of the connector is the same, it does more and does it faster. Thunderbolt can carry data, so it can be used to connect devices such as docking stations and hard drive enclosures. It was developed to support fast data transfer and high bandwidth on a single cable to bring desktop-like speeds to mobile devices. Thunderbolt can also deliver up to 10W of power-over-cable.

Will Thunderbolt Work With Mini DisplayPort? 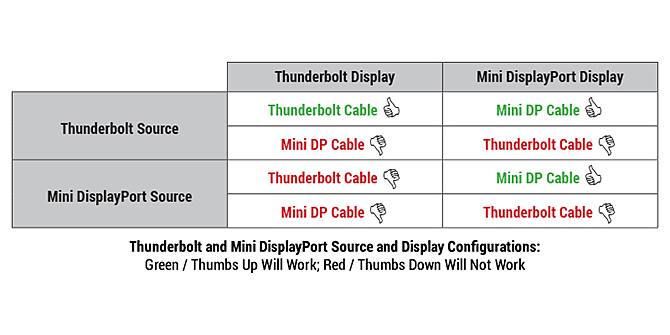 Something to note: the information here applies only to Thunderbolt 1 and 2. The new Thunderbolt 3 technology uses a USB-C connector, with even faster speeds and up to 100W of power-over-cable. It is backward compatible with Thunderbolt 1 and 2 devices using an adapter.