How to Beat the Maximum USB Cable Length Limit

All USB cables have a maximum length, but the good news is a variety of cables and extenders are available that allow you to reach much longer distances without signal loss. USB max length

We’ll explain more in a minute, but if you want to know how long your USB cable can reach, the following table is a good starting point. longest Usb cable

The USB standard was originally intended to connect desktop computers to peripherals such as printers, mice, keyboards and storage devices. The distance between devices was typically short. Fast forward to the present and USB cables have found applications well beyond the desktop.

For example, it’s not uncommon for the USB‑C port on a laptop to be connected to a wall-mounted display 30-feet away, or a camera in a hallway to be connected to a computer inside an office. You can now lengthen USB connections with select cables and extenders. Let’s take a closer look at USB cable length limits, the technology, and how to extend a USB connection without losing signal strength.

Why do USB Cables Have a Maximum Length?

Most communication protocols used to transfer data between computers and other devices use a signaling method called duplex, including Ethernet and USB. Devices connected in a duplex system can communicate with each other in both directions. So when a USB host sends a “packet” of data to a device connected by a USB cable, it waits for a response before sending the next packet. If no response is received, it tries sending the packet again.

Clearly, timing is very important. As the data transfer rate goes up, the USB host has less time to transmit its data packets and receive a response. The further the signal has to travel, the more likely that an error called a “late collision” will occur, so high data transfer rates typically require a shorter cable. USB cable length limit

Is USB Half-Duplex or Full-Duplex?

USB 3.x (SuperSpeed) is full-duplex, meaning it can send and receive data simultaneously. USB 1.0 and 2.0 are half-duplex (they can transfer and receive data, but not at the same time). To get the benefit of the faster full-duplex communication, both host and connected devices must be USB 3.0 or higher.

The Conductivity of Copper Cabling

Another factor that limits USB max length is the conductivity of copper itself. As a signal travels down a copper wire, it loses some of its strength. The amount of signal loss, referred to as attenuation, is measured in decibels (dB) per foot or meter. The further a signal has to travel, the greater the signal loss until it reaches the point where the receiver is unable to detect or understand the signal. Signal degradation can be reduced by using a well-insulated, larger gauge USB cable.

Copper cabling is also susceptible to noise. For example, running cable too close to light fixtures or electrical power lines can introduce noise into the signal, which affects the quality of the signal rather than its strength. Communication protocols like USB include strategies for mitigating the effects of signal distortion. how long can a USB cable be 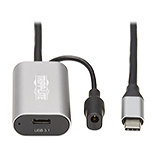 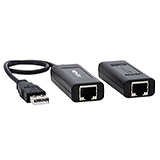 Achieve Maximum Distance with These USB Cables and Extenders

ABOUT TRIPP LITE BY EATON

Tripp Lite joined the Eaton family in March 2021. Eaton has long been a premier name in backup power and power management. The acquisition of Tripp Lite transforms Eaton’s distributed IT infrastructure and connectivity equipment capabilities. Combining our product strengths and expert personnel allows us to offer comprehensive and innovative solutions for critical power and digital infrastructure applications, backed by quality, service and support you can trust. Learn more at tripplite.com/byEaton.