How to Choose the Right Power Distribution Unit 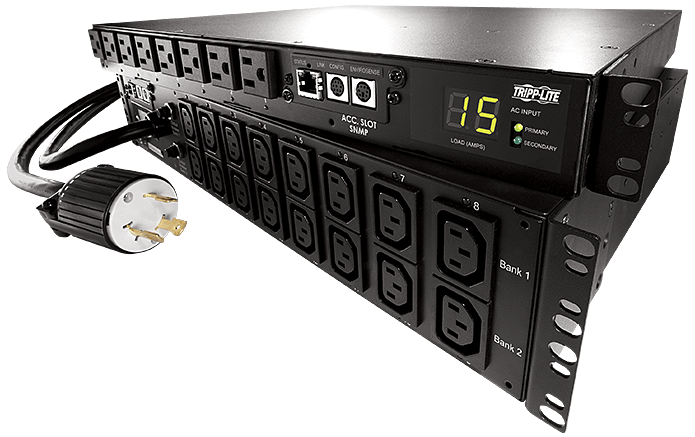 The first step in selecting a PDU is to determine whether your customer wants to mount the PDU vertically or horizontally. When mounted vertically, a PDU occupies no rack spaces (0U), because it is attached to one of the rack’s vertical rails. Many PDUs feature button mounting to simplify vertical installation. Users slide mounting buttons, located on the PDU, into mounting holes, which are featured on most major racks. Mounting only takes a few seconds and is much easier than the standard method of mounting with screws.

When mounted horizontally, PDUs commonly occupy one or two rack spaces (1U or 2U). Since PDUs generally function as the entry point for power into a rack, most offer a 10- to 15-foot input cord. With long input cords, PDUs can be mounted anywhere within a rack enclosure, even at the top of a rack, and still be plugged into a distant power source. Depending on the model, PDUs can also be mounted on a wall or under a counter.

The second step is to determine the input phase. Some PDUs accept single-phase input, and others accept 3-phase input. What does “phase” refer to? Power moves along a transmission line in the form of a wave. Each of these “waveforms” is called a “phase.” For efficiency’s sake, utility companies deliver three waveforms (or three phases) on the same transmission line from their generator to a facility. Also for efficiency’s sake, a facility’s electrical panel will deliver 3-phase power along some circuits to high wattage loads. For lower wattage loads, the panel will split the power into single phases delivered on separate circuits. The phase of the PDU must match the phase of the outlet it is plugged into.

This is a very simple—but critical—part of the PDU selection process that can cause trouble during installation. The problem is that connectivity types vary so widely, and many people are unable to identify even the most common plugs and receptacles. Because of these limitations, many customers will either overlook this part of the selection process entirely or will simply make an educated guess or assumption.

What kind of INPUT plug should the PDU have? Ideally, the input should be connected to a UPS system or generator-supported power source. Note: many PDUs are rated for worldwide use and have a detachable power cord with an input to which the user attaches their local plug.

Once you’ve determined the application requirements for the PDU, it’s time to ask your customer what they want to do with the PDU. Depending on their answers, you’ll be able to narrow down their choices to one of four main categories: “basic,” “local metered,” “monitored” or “switched.” Single-phase PDUs are available in all categories. 3-phase PDUs are available in local metered, monitored or switched versions.

Basic PDUs offer simple but highly reliable power distribution to multiple pieces of equipment. They feature multiple outlets, a long input power cord and a housing with versatile mounting options. Basic PDUs are available in single-phase configurations (single-phase in and single-phase out).

Networks are always growing. As additional hardware is added, the input power source, whether it is a UPS system or a generator-supported wall outlet, may eventually become overloaded. Once overloaded, PDU or circuit panel breakers will trip, causing network downtime. Local metered PDUs provide a practical way for managers to enhance availability by preventing overload. Local metered PDUs offer the same features as basic PDUs, with the addition of a digital load meter.

The meter allows network managers to locally view the total power consumption (in amps) of equipment connected to the PDU. As equipment is added, managers can see the increased load and take proactive steps to increase input capacity (with the addition of more or larger UPS systems or additional utility circuits). Local metered PDUs are available in single- and 3-phase configurations (single- or 3-phase in and single-phase out). 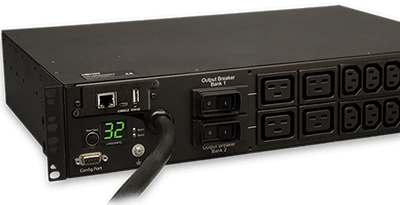 Monitored PDUs offer the same features as metered PDUs, with the addition of a built-in network interface and included software. The interface and software allow managers to remotely view PDU load levels via an Ethernet network connection.

In addition to the four major PDU categories (basic, local metered, monitored and switched), PDUs are available for special applications.

Hot-swap PDUs feature an external manual bypass switch that allows the entire UPS to be removed for maintenance while the PDU remains installed, continuing to power connected equipment as long as utility power is present. They are connected in line between the UPS system and supported equipment loads.

Automatic transfer switch (ATS) PDUs have two input cords, which can be plugged into two separate power sources. Depending on the desired level of power protection, the two sources can be two UPS systems, two generator-supported utility wall outlets or one UPS system and one generator-supported utility wall outlet. When the primary input power source is normal, the PDU uses it to power connected equipment. If power fails or voltage drops below acceptable limits, a highly reliable mechanism within the ATS automatically switches to power connected equipment with the secondary input source. These features allow managers to increase network availability by providing equipment with a redundant, backup source of power.

The chart below compares the features and benefits of each type of PDU: 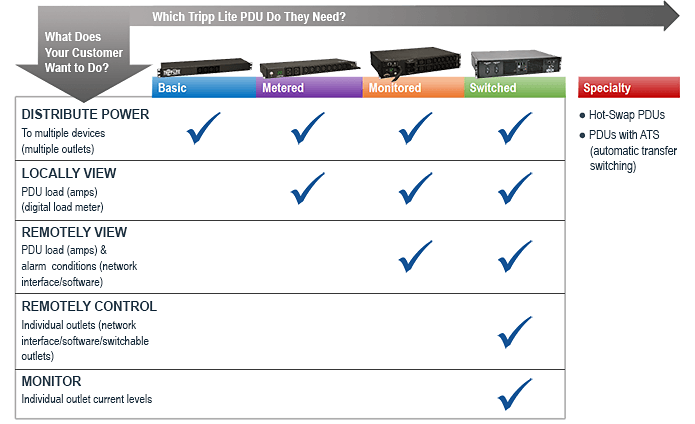 Now that you’ve mastered the basics of PDU selection, it’s time for you to practice selecting a PDU using Tripp Lite by Eaton's interactive selector. Experiment with altering different PDU features to narrow or expand the results.

Tags: How to choose the right power distribution unit, PDU types, Tripp Lite PDUs, How to select a PDU

ABOUT TRIPP LITE BY EATON

Tripp Lite joined the Eaton family in March 2021. Eaton has long been a premier name in backup power and power management. The acquisition of Tripp Lite transforms Eaton’s distributed IT infrastructure and connectivity equipment capabilities. Combining our product strengths and expert personnel allows us to offer comprehensive and innovative solutions for critical power and digital infrastructure applications, backed by quality, service and support you can trust. Learn more at tripplite.com/byEaton.