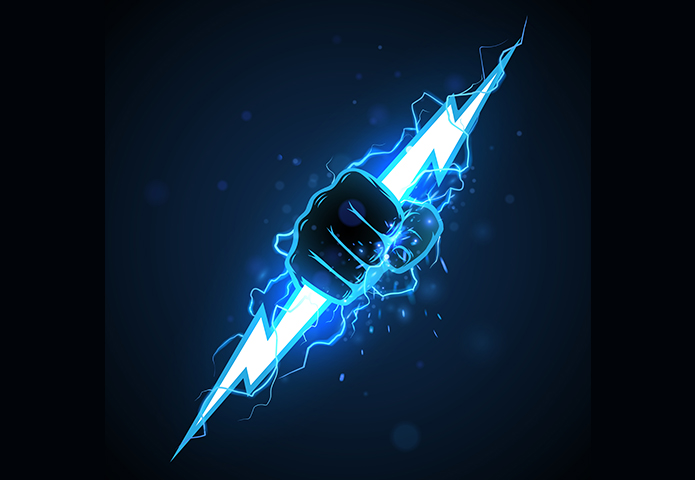 Severe weather events have become more common and more potent, and our aging power grid is struggling to handle the stress. As our climate changes, severe weather can hit virtually any time of year. To be prepared, you need more than a flashlight and a few jugs of water.

Lightning strikes, voltage drops and power failures put your electronics and data at risk. When lightning strikes the ground, it sends thousands of volts through power lines, affecting nearby homes and businesses. When factories abruptly slow their electricity consumption—during a shift change or assembly line shutdown, for example—the excess voltage they would normally have consumed is sent back through the grid. When utility companies are faced with wildly fluctuating electricity demands, as they are during the summer months, they may accidentally direct too much voltage to a certain area.

But it doesn’t take a severe thunderstorm or overtaxed power grid to wreak havoc on sensitive electronics. In fact, an average of 120 power problems assault computers each month, and even relatively minor fluctuations can cause serious damage.

And downtime carries an enormous price tag. Electric Power Research Institute (EPRI) estimates the national cost of power interruptions to U.S. electrical customers at approximately $80 billion, with momentary interruptions accounting for two-thirds of the total cost. Further research suggests that power outages are responsible for the U.S. economy losing between $104 billion and $164 billion each year, while power quality issues are blamed for another $15 billion to $24 billion in losses.

Generally speaking, if you plug it in, it needs protection. Without protection, any device can fall victim to surges, spikes, brownouts, and even total power failure.

The best way to protect devices is with an electrical surge protector, power conditioner (a.k.a. line conditioner) or uninterruptible power supply (UPS system). The solution you choose depends on several factors, including the quality of your facility’s electricity, your equipment’s environment, and the type of equipment needing protection.

Let’s take a look at each solution.

Power surges are both common and costly. According to IBM, every home or business gets hit every day by at least one surge measuring between 100 and 1,000 volts. The effects of a surge can be subtle or dramatic, depending on the surge’s duration, intensity, and whether the affected devices have adequate protection. Smaller surges destroy internal circuitry slowly, over the course of several months. Larger surges, on the other hand, inflict the same damage, but in less than a millisecond. If the surge is long enough and strong enough, it may even heat up the internal electronic circuits to the point that they catch fire. In addition to the obvious costs needed to replace damaged devices, surges also cause lost productivity (when employees are idle in business environments) and loss of use (when home theater equipment and appliances are idle in home environments).

Surge protectors protect against spikes and surges. They come in many configurations, and most include EMI/RFI filtering to decrease line noise and improve audio/video quality.

A surge protector should be sufficient for devices with lower inrush currents, like TVs and stereos. Their usefulness, however, depends on the protection you need. If your equipment is mission-critical or your facility experiences frequent outages, this might not be the solution for you.

And while surge protectors require less money up front, they often cost more in the long run, because they typically need to be replaced every few years.

What a power conditioner will not provide is EMI/RFI shielding. If you want to improve video quality or decrease line noise, this might not be your best option.

A UPS can do everything a surge protector can do, but its main purpose is to reduce downtime that can cost your business money. And unlike a surge protector, a UPS features battery backup that allows equipment to stay up and running through power failures.

Like power conditioners, many UPS systems have voltage regulators. These models not only provide battery backup, but they also keep voltage at an acceptable level.

For a data center or server room, a UPS is your best option. They come in various configurations for both single- and 3-phase applications. Many also include special features, like LCD panels, hot-swappable batteries and energy-saving operation.

So which should you choose? Take a look at this chart for an easy comparison: